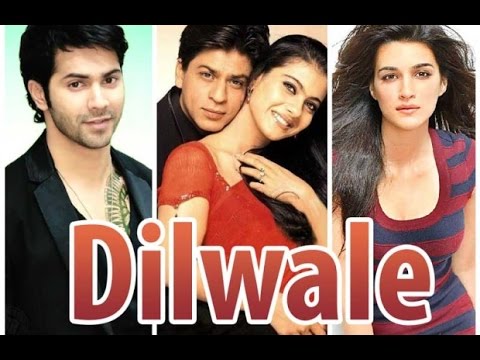 I don’t normally review Bollywood movies , but For Shah Rukh  Khan there is always an exception……….There are a lot of cars in Dilwale.For anyone who knows this film is directed by Rohit Shetty, this won’t come as a big surprise. What is disconcerting though is the way this car fetish threatens to overpower the rest of the movie, undermining the actual story and almost drawing the viewers’ attention away from the main protagonists. I say almost because such a feat would be impossible, actors like Shah Rukh Khan and Kajol have such a strong screen presence nothing short of a hurricane in the movie theater could possibly take our focus from them. The screen lights up with their presence, they give depth and meaning to the flimsiest script and never fail to command the audience’s attention. Kajol in particular is luminous and Shah Rukh proves that he still knows how to hold the audience in the palm of his hand.

Raj and Meera belong to rival crime families, and their tragic relationship of love and revenge becomes the main obstacle to the love affair that their respective younger siblings Ishita and Veer inadvertently strike up. This is Bollywood after all not Cinema verite, so such coincidences are expected from the first frame. In fact the entire film wallows in indulgent clichés and nostalgic references to Khan’s most successful films. We are shown Raj and Meera’s story in flashback and here is where the edge of intrigue holds the audience’s attention. From the first dream sequence where the Raj sees himself shot to the sudden twist of betrayal and then the slow unravelling of the secrets which keep him and Meera apart for fifteen years.

Kirti Sanon as Ishita cuts a mostly decorative figure but Varun Dhawan’s perfect underplaying of the’ not the sharpest tool in the box’ younger brother  Veer is one of the highlights of the movie. Varun has the kind of charm Govinda was once famous for: the ability to play the kind of mischievous ingénue that can reduce the fiercest, most bloodthirsty killer/international gold smuggler to “Tiger bhaiya”. There is also plenty of humour provided by Jonny lever as “Money Bhai” and Pankaj Mishra as Oscar Bhai but Boman Irani falls short in both the comedy and villainy departments.

While the Shah Rukh –Kajol Jodi does its magic the rest of the film falls short because of a weak script, a lot of unnecessary action sequences and a dire lack of editing. What made Rohit Shetty’s previous outing with Shah Rukh a lot smoother to watch was the fast paced action, shorter scenes and a script someone had actually worked on. Like a lot of Bollywood movies these days some of the running gags and much of the main character’s dialogues are passable but there is a lack of continuity with the main story that makes it all seem ad hoc at times. After watching the brilliant Jawani Phir Nahi Aani , perhaps Bollywood would do well to outsource a few script writing jobs to the likes of Vasey Chaudhry who knows how to keep an audience enthralled. The songs in Dilwale are perhaps the biggest disappointment. Though the song “Gerua “is catchy and melody to stay with you after leaving the cinema hall, the way it and the other songs have been picturized has  quite rightly been mocked as backdrops from windows 9, suffering from a complete lack of originality or imagination. With the kind of talented cast most directors would literally kill for and an awe inspiring budget combined with every facility known to modern film making one wonders why Rohit Shetty couldn’t make something better. The title Dilwale was an obvious ploy to pull in audiences still in love with the Raj and Simran from Dilwale Dulhaniya Ley Jaygay. However, just as It would be a mistake to look for a Picasso in a junk yard or order a steak in a vegetarian restaurant, if anyone expected a DDLJ sequel they should wait for Aditya Chopra to direct it. Rohit Shetty is not known for making films with subtlety, depth or emotional nuance, but what he can make seems to please enough people to keep the cash registers ringing. For all its faults, Dilwale is pulling in the crowds because it’s a great way to pass a few hours, especially if you are a diehard Shah Rukh –Kajol fan. It manages to provide a lot of family friendly fun and lots of entertainment, but it could have been so much more.

And a special note on Shahrukh Khan: SRK fans are always a little disappointed these days because we want to recreate a magic our favourite star is just not interested in making again. While cinema goers don’t have any particularly high expectations of, let’s say, Salman Khan, whose unique presence is usually deemed enough for his fans, Shahrukh is handicapped by his own talent. People just expect more from one of the most talented actors in Bollywood.