That phrase from the iconic Dhoop Kinarey had three generations of women swooning with the younger lot making mental notes on romance.  Tall, handsome and sophisticated and a well-heeled professional to boot, Dr Ahmer (Rahat Kazmi ) paired with the fun loving Dr Zoya (Marina Khan ) are still one of the most famous romantic couples to grace our screens.

Throughout the 80’s and 90’s we were swept off our feet by some very likeable couples and romantic writings in drama serials such as Ankahi, Tanhaiyan ,Bandhan and many more. However, the scope for romance has slowly become more and more limited as male protagonists have become villains rather than heroes and our heroines lose agency left to sit weeping in corners, waiting to be rescued.

In the past marriage and a happy life were once the ending to a story of self-realization, now the wedding vows mark the beginning of a torturous process of misunderstandings with  betrayal  lurking around every corner. Today’s hero is a far cry from Dr Ahmer, he does not waste time judging a woman’s character or personality.  Clearly the path to his heart is through his stomach as his main concern is who makes good parathas and the roundest koftas.

Today’s heroine has also changed: she is weighed down with domestic responsibilities, attacked on all sides and in constant fear of desertion, while  carefree and happy are words reserved for the villainous cousin or secret girlfriend. The wonderfully laid back , working woman Aani Khala (Badar Khalil) of Tanhaiyaan would never qualify for a rishta in today’s onscreen climate;her outspoken ways and cooking methods (Put  the ingredients in a pot and read a book till cooked) would rule her out as wife material immediately.

Glancing through a list of the most popular dramas of the last few years serials such as Meri Zaat Zara Benishan , Khuda Aur Mohabbat, Daam, Humsafar, Dastaan, Zindagi Gulzar Hai ,Aun Zara  and more recently Pyarey Afzal stand out as memorable romances. So,what is the modern perspective on romance?

We asked a few of the talented writers and directors behind some of  these serials  what magic pixie dust they sprinkle to make such scenes work :

According to the director of the award winning serial Dastaan, Haissem Hussain, “Showing romance on screen is all in the timing. The measuring of looks, space, texture, light, the silence, the right words at the right time .All measured and timed to perfection.” He adds,  “It is the creating of tension and then the sudden release from it.”

One of the most unforgettable scenes from Dastaan shows Hassan ( Fawad Khan) and Bano (Sanam Baloch) searching the rooftops to catch a glimpse of one another. The beautiful play of light and shadow dancing across the actors faces  and in the glow of the lanterns framed by the soft darkness of a moonlit night make this a classic.

What makes it epic is that it isn’t just  romance about lovers who are meant to be together but they are torn apart by events beyond anyone’s control (in this case Partition). The viewer becomes part of their journey and though we want them to find each other, we also see how they have changed .

Samira Fazal who wrote the screenplay for Dastaan says  that to write romance “A writer has to feel it, and write what comes from the heart. The use of subtle gestures with eyes with less words  and no physical touching – because that would ruin it.”

Mean what you don’t say

The absence of the physical is often replaced by that other device – banter: Dialogue, has a strong hand in building the chemistry and relationship between the characters. The back and forth snappy dialogue between couples holds a wealth of implicit meaning that lays the foundation of their relationship. Even in Dhoop Kinarey Dr. Irfan’s (Sajid Hassan) shouted out proposal to Anji (Kehkishan Awan) is ridiculously romantic.

In Kuch Pyar Ka Pagalpan, which became a cult classic, it was the witty exchange between the four protagonists but especially the chemistry between Shamraiz (Mikaal Zulfikar) and Kiran (Sanam Baloch) that had the audiences guessing the outcome till the very end.

Though sometimes, actions speak louder than words and give us a tangible insight into the characters feelings. It is these actions that we remember as romantic moments. In Dhoop Kinarey, when Dr. Ahmer returns Dr. Zoya’s earrings we realize how he really feels despite the stern talking to he gave her the night before. In Kuch Pyar Ka PagalPan when Shamraiz spends the whole night waiting up for Kiran to return safely it speaks volumes about his concern for her. In Ankahi, Timmi gives up his true love so that she may have a better life, all bring a lump to our throats and get us teary-eyed.

Poet, writer, director, and (dare we say) renaissance man, Sarmad Sehbai describes romance more earthily, “The way a woman moves says it all and of course,  the eyes, which are the only door .It is veiled erotica,the way the actors are shot and directed”   His much anticipated film Mah-e-Meer is an intense, passionately romantic movie about a modern day poet with a deep psychological connection with the Urdu poet Mir Taqi Mir

In Mah-e-Meer trailers too we see lead actress Iman Ali as the embodiment of that veiled eroticism in her role as a courtesan. Sehbai acknowledges that the ‘tawaif’ embodied the cultural metaphor and with the downfall of the Mughal Empire, “There was a loss of beauty and pleasure embodied in courtesan culture.” he elaborates.

However, it is not only veiled eroticism but the hidden subtext that builds the romantic tension as well. From half acknowledged feelings to never quite spoken but definitely non-platonic relationships, sub text is also key to how romance plays out in Pakistani dramas. In absence of physical proximity, the hints of ideas are usually what charges the the relationships and the audiences interprets what was not said.

Romance is not limited to purely to passion. Often times simplicity is just more powerful. Author Faiza Iftikhar has written her fair share of romantic scenes ,and though her recent romantic comedy  Aun Zara captured hearts all over the world she says her favourite romantic scene comes from  Aik Nayee Cindrella,   “When Meesha tells Roman that Mayer,( his rival)  has proposed to her, they start looking at each other and only the expressions in their eyes explain their feelings for one another. Romantic dialogues should be simple and touching” she explains, following the Jane Austen school of thought encapsulated by Mr Knightley’s famous declaration to Emma “ If I loved you less I might be able to talk about it more.” 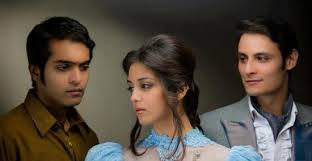 When contemplating classic romance, no discussion could be complete without  the Queen of contemporary romantic writing, Farhat Ishtiaq. Her mega hit serial Humsafar became a phenomenon , propelling its lead actors into Bollywood and bringing much needed confidence back to  Pakistani Drama industry beset by the success of Indian and Turkish serials.

“You have to be a romantic at heart, hopelessly romantic,have love for nature, be emotional, oversensitive …at least this is who I am. I cry, I laugh with my characters.and find romance in the most unusual situations even in everyday life” she muses. That very basic connection to nature is often a conduit for romance in the  culture  of the subcontinent using  the summer rain as a metaphor for desire seeking an escape.

“Rain  inspires me a lot.” confesses Ishtiaq adding playfully that she can watch it for hours without ever getting bored . The rain scene so beautifully picturised by  director Sarmad Khoosat in Humsafar  illustrates this perfectly. Khirad’s naivete and her sheer uninhibited  joy  as she dances in the rain contrast perfectly with her husband Asher’s  distant, more guarded position. Ishtiaq’s latest project Diyar-e- Dil (hyperlink http://www.dawn.com/news/1170348 )  is another romantic story which .promises a more playful, younger romance than her previous stories. 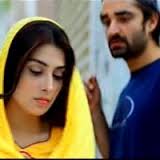 Today, where every second drama is about second wives, third wives or unfaithful men , simple devotion is just as romantic as any flowery speech .In Pyaray Afzal  ,the hero Afzal accepts Farah’s rejection  but her hold on him and his own dedication to that dream of love  never ends . Similarly in Humsafar ,Asher sitting alone reading a newspaper a few years after Khirad has left, making it clear that he has not conveniently married Sara may have been more romantic than all the other more contrived ones .scenes.

Khalil sahib’s current drama on-air, Mera Naam Yousuf Hai (hyperlink http://www.dawn.com/news/1174283/review-mera-naam-yousuf-hai-is-a-one-sided-love-story-so-far ) directed by Mehreen Jabbar who suggests that romance is “ All about the things that are unsaid and the silent moments that can create the best romantic scenes.”This exemplifies another fundamental of subcontinental romance: the unconscious language of romance, where lovers interpret each other’s emotions without speaking. This subtlety is perfectly translated in Jabbar’s earlier drama Daam,with. the  “blink and you will miss it” quick change of scenes as Junaid insists that Zara wear another gajjra at his sister’s engagement, leaving a quiet glow on Zara’s face and the the viewers hearts. 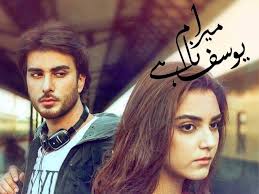 This  works under the expert guidance of a good director like Mehreen Jabbar who knows how to edit and shoot the actors expressions to show that unspoken rapport otherwise in less able hands it can be confusing.Numm is a recent example of an emotionally charged story with great actors whose silences were very difficult to interpret.

Here humour was the key, their easy, unqualified acceptance of each other made their romance just as meaningful as any star crossed lovers. More recently the mature relationships in Jackson Heights with Bhatti sahib’s (Nouman Ijaz) and Salma (Ameena Sheikh) (hyperlink http://www.dawn.com/news/1160653 ) worked because you could see the growth that they bought in each other. The beginnings of the relationship between a younger man Jamshed (Adeel Husain) wooing the older Michele (Marina Khan) too was also well done.  In each case the screen chemistry was palpable.

The idea that love can heal the deepest wounds is often behind some of the less traditional romances portrayed on our small screens. Writer Zanjabeel Asim Shah’s romances offer surprising combinations. Her recent take on Beauty and the Beast : Bashar Momin (hyperlink http://www.dawn.com/news/1144890 ) , carried this theme of redemption telling the story of a cruel ,psychologically damaged criminal who is transformed by unconditional love.

Similar themes of redemption flow through her stories like Aik Nazar Meri Taraf where two victims of their respective spouses adulterand infedelity, find love and hope in each other.In anopther story, Saat Pardon Main , she  shows a transgender man finding himself through the love of a girl betrayed by another man. Shah’s adaptation of the classic movie Anjuman  also had more romance than the earthier original. Anjuman is no innocent girl but a courtesan used to controlling and manipulating men till she meets a man she actually loves. The wonderful scene picturised by director Yasir Nawaz, where Anjuman asks her disdainful captive Asif  “Kissi nay aap ki nazar uttari hai ?” is hard to forget.

Here is a list of our favourite romantic scenes :

Romance never goes out of style, no matter how practical or rational we try to be, a simple glance, a haunting melody and a fluttering heart will always be in fashion.