Hum TV’s latest offering Mann Mayal has been introduced with a lot of fanfare and the kind of publicity that is usually reserved for Movies but is now the status quo for big budget dramas. The star attraction is of course the return to the small screen of Hamza Ali Abbasi, whose portrayal of Pyarey Afzal has now become iconic. It is to Abbasi’s credit that, despite being one of the brightest stars of the nascent Pakistani film industry. he has not abandoned the medium that helped keep the entertainment industry alive during leaner times. Mann Mayal is produced by Momina Duraid, Samina Humayoon Saeed and Sana Shahnawaz. Written by Samira Fazal and directed by Haseeb Hassan, this serial also stars Maya Ali, Aisha Khan, Gohar Rasheed and Aiman Khan as main characters. The cast boasts not to be missed performers like Saba Hameed, Atiqa Odho, Javed Shaikh, Arjumand Rahim and Vasey Chaudhry in its ranks too. 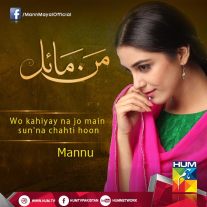 Plot or the story so far:

The story revolves around Mannu (Maya Ali) and Salahuddin (Hamza Ali Abbasi) ,who live in a provincial town in Sindh. Mannu is best friends with Salahuddin’s younger sister Beeya and their families share the usual friendliness and trust of neighbors with like minds that comes through years of familiarity. The greatest difference between them is the fact that Mannu’s family is comparatively wealthy and lives together according to tradition with a full quota of relatives, while Salahuddin lives a simple but respectable life with his mother, father and sister. The first episode is taken up with Beeya passing her final exams with an ‘A’ while Mannu much to her own disappointment ends up failing. Beeya has been forced to study hard by her paragon of a brother and this impresses Mannu’s father enough that he asks Salahuddin to tutor Mannu.

From the first scene it is obvious that Mannu and Salahuddin are wary of each other, almost antagonists, but the audience soon realizes that friction is just a veneer for a simmering attraction that both are trying to suppress. Salahuddin is the most discerning of the pair, a quiet, studious, sensible young man who understands the world well beyond his years. He knows his lack of position and wealth would make any connection difficult and he doesn’t want to be distracted from his own aim to be somebody by a relationship that will only cause him pain. Mannu on the other hand is naïve and not as self-aware, she is attracted to her friend’s straight-laced brother but isn’t sure why. She jumps from one mood to another like a child, trying to attract the attention of her determinedly serious new teacher. Meanwhile Mannu’s family has quietly invited a family to come and see Mannu for a “rishta”. Blissfully unaware, Mannu visits her friend Beeya to make mithai for the coming guests, but ends up studying with Salahuddin again.

The episode ends with a teaser for next week showing Gohar Rasheed as Mikaal the prospective rishta.

Director Haseeb Hassan is a stickler for details and it shows in all his projects from Bol Meri Machli to Dayar e Dil. Mann Mayal has some wonderfully authentic settings and is beautifully shot with the kind of lighting and ambience which invites the audience into the character’s little world. Haseeb Hassan often gives a distant, third person perspective to his work but for this intense love story there is a lot more warmth and intimacy in the way this drama has been made. For a first episode this was remarkably slick; relationships, fault lines and most importantly the main protagonist’s attraction for each other were nicely established without clumsy dialogues and forced situations. Full credit is due to Samira Fazal, for providing a fast paced script which not only sets the scene but moves the story forward.

Despite some strong echoes of Pyarey Afzal in this episode, Hamza Ali Abbasi has managed to delineate Salahuddin from the first moment on screen. Modest, middleclass background notwithstanding, Salahuddin is not Afzal. Abbasi manages to make a strong impression in this first episode, his powerful screen presence and strong, controlled performance promise great things ahead for this serial. Maya Ali has done an excellent job: her enunciation is under control and despite Mannu’s almost quicksilver changes of mood and argumentative nature; she has given the character just the right amount of vulnerability to be likable .So far Ali has controlled the “bholi larki” vibe enough that Salahuddin’s attraction to her seems feasible.

The main leads and indeed the entire cast share an easy chemistry, making every interaction seem natural and normal. In typical Samira Fazal style all of the characters have a role to play and are not treated as “special effects “to keep the background interesting. The Mothers, Fathers, Chachis, Phupo and even cousin Tipu have their own unique characters and are anything but generic. Mannu’s father in particular is sure to become a firm favourite with the younger crowd,(especially the girls ) who probably wish their parents were enlightened enough to find them a  handsome, young tutor like Salahuddin..

The most obvious critique is that the whole episode seems a little too familiar , the sets , the wardrobe, the atmosphere of a provincial town , the friendly terms between families of different means and the relationship between Mannu , Beeya and Salahuddin all come a little too close to the Pyarey Afzal aesthetic. hopefully that is superficial and the next episode teaser does seem to dispel it, but it is too powerful an image to ignore till then. Similarly the way Mannu sneaks out at night to visit a Mazar to pray for success in her exams was very reminiscent of Sadqay Tumharey.

The episode is well made and captures the audience’s attention throughout however for the cynical  Mannu’s character is a very recognizable cliché .The way she jumps about knocking into people, sneaking out at night to visit a Mazar, her stubborn, “stand your ground” nature and quick comebacks, are a stock persona we see in every third drama. It really is to Maya Ali’s credit that she has made this character a lot more authentic than she deserves. Isn’t it time the audience was treated to a better, more authentic vision of girlhood than this? As the serial progresses, perhaps Mannu may also reach some level of nuance beyond the expected.

So far this drama seems to be bring back HUMTV to more family oriented viewing. The recent fervor at Hum TV to make dramas like Sangat and Gul e Rana which glamourize rapists may thankfully have abated. http://images.dawn.com/news/1174079

This is a well-made drama worth watching, anyone who sees the first episode cannot fail to want to see the next. If Mann Mayal can manage to steer clear of obvious clichés, it has the potential to be not only a blockbuster, or a  “must watch “ but something iconic, all the ingredients are there  The best part is that writer Samira Fazal has said in a previous interview http://images.dawn.com/news/1174655 that the drama is just 24 episodes and won’t be stretched to death like so many good stories.

For those curious about the name change from Tera Ghum aur Hum to Mann Mayal , this original interview of KRQ conducted By sadaf Siddiqu and Sadaf Haider might be of interest