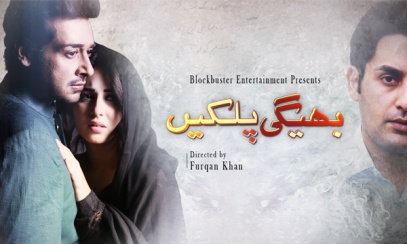 Bheegi Palkein is the first offering from actor Faysal Qureshi and Director Furqan Khan’s new production house Block buster entertainment . At first I had been looking forward to this drama because of the Bashar Momin chemistry of Ushna Shah and Faysal Qureshi but after watching Ushna in absolutely horrible  Dua and Faryal Mehmood’s annoying stint as Asma Jehangir in Farwa ki ABC ,I lost some of my fervor. Add to this the script writers total lack of any kind of imagination or sense in writing the initial cough , splutter …cough again .. “romance “ in which Afaan Waheed is the angelic Umar , who meets the equally angelic Mehr Bano played By Ushna Shah, in some  romantic rain  and I had almost had it 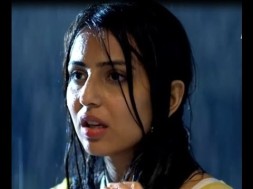 . In case anyone was in any doubt as to the absolute goodness of Mehr Bano the script writers keeps reminding us at two minute intervals because her purity and goodness is essential to her later mazloominess .  Anyway Ms Bholi larki Mehr Bano meets a man on the street and her poor , sick mother agrees to marry her off to him … as they say Allah Malik hai

Fari wants her brother to marry her rich friend Aisha but is forced to accept Mehr Bano as her Bhabi . Both Umar and his mother have all the intelligence of grazing cows …. they eat , they sleep but they have no time to actually think about their lives or what is going on around them . Fari has been manipulating them since she could talk and with Mehr Bano’s entry their whole family dynamic is shaken up. Here is where this run of the mill , drama suddenly takes wings and soars .  Initially Fari just seems spoiled and immature , but the audience slowly realises that there is something seriously wrong with this woman . She has absolutely no empathy for anyone and will stop at nothing to manipulate and lie her way into getting what she thinks she deserves. She lies , she steals , she does everything short of murder , even suggesting to her stupid mother that they could “sell” Mehr Bano to get rid of her after her brother dies. 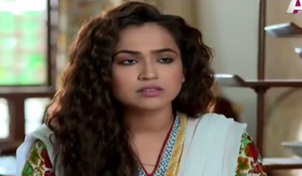 Faryal Mehmood has given a standout performance by underplaying this nasty character and bringing on the menace slow burning fire which becomes a conflagration with time . Initially I could even understand Fari’s antagonism , Mehr Bano is everything she is not , loving , kind ,annoyingly perfect etc .. but Faryal is not your average angry nand , she seems to have some serious mental issues.

Much as I admire Faryal’s performance she is not the only thing keeping this boat afloat . First of all , Shock … horror … surprise Ushna has taken her acting game up  quite a few notches . I am not sure which episode was shot when ,but from about episode 7 on wards she seems to have found her groove . By episode 13 she has come out of the ridiculous ” Ms Perfect shell ” the writers had built around her and given a strong showing . Faysal Qureshi as Hassan ,has a fairly passive role as the Fari’s cousin and rejected rishta . After Umar dies ,  Hassan and his mother act as a solid support for Umar’s grieving family . Faysal’s mother is Umar’s mother’s sister and had always hoped for Fari as her bahu , but Fari considered them provincial and backward . Affan Waheed is no doubt a good actor but he just plays the same role of again and again . I remember him from Kafir and everything I see him he is playing Mr virtuous . I really liked him in Sari Bhool hamari thi , he had more of a nuanced role in that serial but he doesn’t have much to do in Bheegi palkein except be a pleasant memory and the means of connecting Mehr Bano to Hassan. 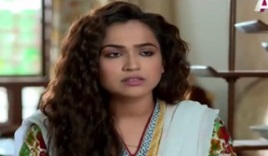 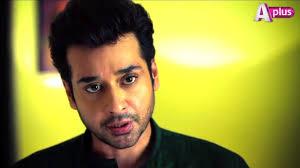 meanwhile ,Faysal Qureshi’s underplaying is fantastic , and he handles each situation with a skillful  subtlety that allows the audience to understand everything without lambey lambey dialogues . After Umar’s death the story picks up pace , another ex rishta of Fari’s is interested in Mehr Bano and tries to kidnap her while Fari gets crazier still because she can see the growing attraction between Hassan and Mehr Bano .  Furqan Khan has had a hand in directing some good dramas , Roag in particular is a Huge favorite for me and on an off I have watched his dramas. I was a regular watcher of Iqrar last year but after a strong start it kind of petered out  because the story meandered into  an illogical dead end 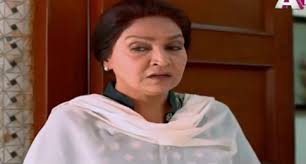 I like this drama first of all, because of the amazing screen chemistry between Faysal Qureshi and Ushna Shah , it is still electric ! Then the characterisations , are realistic and the reactions to each situation make sense. The actress playing Hassan’s mother is particularly good . She can see  Fari is not as she seems but allows her allegiance to her sister to guide her . Similarly Fari’s mother can see her daughter is crazy and may well have always sen it but just doesn’t want to face  the truth . Its just easier for everyone to blame Mehr Bano . Mehr Bano is educated and manages to get a fairly good job at her dead husband’s firm because the goodwill Umar generated , if I had any hope of her gaining some dignity or acting like a strong , sensible woman that was beaten out of me by the script writers who are determined to keep the girl helpless . Similarly Mehar Bano is not allowed to use the sense she was born with to avoid Fari’s little plots because that would mean actually working on the plot instead of the Audiences sympathy . 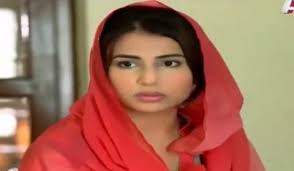 Furqan Khan has kept the action going without wasting time on side tracks or lambey dialogues . He has made a well edited fast paced story which catches your interest despite the cliches . After Mujhay Kuch kehna Hai and Bheegi Palkein I think people should realize a lavish budget and a huge star cast is not the only formula for success. I just wish that Blockbusters Entertainment would hire better writers . Having said that the last four or five episodes the script has been good , I especially loved Mehr Bano finally breaking her goody goody silence. Ushna was amazing and Faryal and Faysal picked up the other end with expert coordination . Best scene this episode was the desperate hug of relief Mehr Bano gives Hassan when he finally lets her out of the bathroom . Followed closely by far’s changing expressions as she works her way out of the situation .Next week the Hassan and Fari’s mothers cook up a plan to marry Mehr Bano off to Fari’s ex-fiance and erstwhile kidnapper …. will Mehr Bano cave ? Call it a guilty pleasure , call it what you will ,I am hooked . As always I want Faysal to get the girl ! On a side note I was watching Abb Kar Meri Rafugiri  and was very pleasantly surprised to see Ushna Shah has indeed improved a lot since Bashar Momin .. looking forward to good stuff from her and Faryal Mehmood . 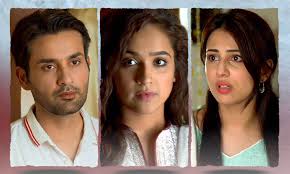