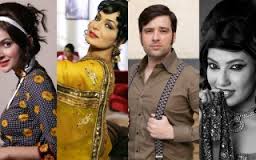 Originally titled NigarKhana ( studio), Main Sitara is set against the backdrop of the old Pakistani film industry, and follows the fortunes of  a set of  characters from the boom days of the mid-sixties through its  ups and downs till  turn of this century .This new drama gives  both  perspective  and sets up some interesting parallels to the new Pakistani film industry which seems to be flourishing. Written by acclaimed scriptwriter Faiza Iftikhar and directed by the owner of TV ONE Seema Tahir Khan, this drama provides a fascinating insight into all those familiar faces we think we know as well as our family, simply because we see them on our screens  every other day .

The story begins with Jharna Begum (Aisha Gul) who is famous for her beautiful voice but at the peak of her career stepped down and married Farhad Sethi (Mikaal Zulfikaar), an actor and TV producer. Farhad is very ambitious and wants to make movies. Jharna on the other hand is heavily pregnant with their third child and tired of her film star lifestyle, she just wants to catch up on the kind of family life she has missed while she pursued her career. So far the story spins around the inevitable friction building up between a couple with competing priorities. Thrown into the mix is a little girl called Soraya, who is obsessed with movies and dancing. The daughter of a good for nothing drug addict and a Maasi (cleaning woman), Soraya finds a friend in Jharna when her family is hired to help the heavily pregnant star. When her family decides to steal from the disorganized Sethi family they are forced to leave in the dead of the night and Soraya is left behind watching Mughal e Azam.

In any other drama we would then see a tale of abject misery in which the servant girl is beaten and tortured or worse for her parent’s sins. However the surprising twist is that although Farhad is naturally angry and interrogates Soraya, in the main she is pitied more than blamed, even taken under Jharna’s Begum’s wing. So begins Soraya’s long journey from a servant to star. Here lies this dramas greatest strength, despite the main protagonists involvement in the in the ‘big, bad’ world of the film industry the audience is not asked to judge them, instead each character is written as an individual with all the normal human frailties, desires , and dreams . Too many of our serials make crude, simplistic distinctions between “good “and “bad” people to comfort the audience’s prejudices instead of writing authentically.

According to the writer the characters are not based on any particular person but composites of many Indian and Pakistani film stars and their life histories. Even in the first two episodes we can catch the reflections of many Bollywood and old Lollywood back stories. Film star Rani’s father was a driver and she was adopted by singer Mukhtar Begum. Similarly the dysfunctional married couple motif has been played out many times off screen, by couples like Amitabh and Jaya Bachchan or Guru and Geeta Dutt. This serial has two seasons so many more easily recognizable figures will come to the fore.

The break out star of this serial may well be the child actress who plays Soraya. She has managed to make an impression at a very early age while looking completely natural and very much at home in front of the camera. Aisha Gul and Mikaal Zulfikaar have not disappointed either and their performances are the glue that binds this story together. Mikaal Zulfikar has made an art out of playing charming narcissists walking the razor’s edge between self-interest and complete self-absorption. His character’s is styled in the very famous Waheed Murad  style, while Jharna is always sporting an up do or copious amounts of curls in the fashion of the times , and both carry it well. The settings, costume design and most importantly even the attitudes are satisfyingly authentic to the time period.

Director Seema Tahir Khan has paid great attention to every detail without letting the styling overwhelm the substance of the serial. She has also managed to get some good performances out of her cast which will later include Nauman Ejaz, Saba  Qamar , Azfer Rehman , Rija Ali and Hassan Ahmed .  On the downside the story seems a little slow at times and lacks the crispness which might have made it the ratings catcher it could be with such a good script.  A little more editing and some wider shots might have made it more accessible too. The way the serial is shot is very much in the old PTV style, with a strong emphasis on interiors and individuals having substantive conversations which actually move the story along. It makes for an interesting comparison to the more film style of drama we see these days; where fewer lines are spoken and soaring background music is used to direct the audience.

Overall this is an intelligent, well-made, with all the hall marks of subtlety and nuance that can make television viewing a pleasure.