Dramas you should watch

Looking for a good drama to watch? Tired of flicking through channels and trying to decipher which serial might be worth following? Dramas are funny things, even when their bad they can be strangely addictive.Once we start one we want to see it through to the end;” fast forwarding” through 30 episodes with all the stoic determination of the captain on the deck of the Titanic .Hopefully our viewing guide can save you having to sit through weeks of bad acting, ridiculous melodrama (unless you want it! ) and stupid dialogues. For all those who have been burned by slick promos and well-made teasers here is a guide to some of the best dramas on right now and the best bets for the upcoming crop.

Dramas you should be watching now:

If you are tired of the usual mazloom aurat or Bholi larki suffering the slings and arrows of cruel fate, try watching a dabang kind of heroine in the shape of Anmol. Played by Mehwish Hayat, Anmol is not just a pretty face; she is strong, intelligent and very resourceful.

When local business man cum Goonda, Mohid (played by Humayoon Saeed) falls in love with her she refuses to accept his proposal and meets every challenge he sets for her with one of her own. Directed in a suitably filmi style by Nadeem Baig of Pyarey Afzal and Jawani Phir Nahi Aani fame, this fast paced story is a battle of wits and egos , where both main protagonists are unwilling to back down an inch.  Writer Faiza Iftikhar (whose credits include Roag and AunnZara) has given audiences a complete package, humour, social commentary and pure entertainment all rolled into one sharply plotted drama.

Despite complaints about the lack of screen chemistry between the lead couple and some contradictions in the story line, this drama remains at the top of the ratings game .Mann Mayal is tangible proof that whether he is awake or asleep in a role, the public loves watching Hamza Ali Abbasi on screen. Maya Ali has surprised critics with a strong performance as Mannu the naive “every girl “next door. Lush sets, bright lights and soaring background music make this an easily digested, piece of entertainment for the majority.

This serial is directed by Haseeb Hassan fresh of last year’s iconic Dayar e Dil and written by Samira Fazal the writer of many popular serials like Shukk, Alvida and Dastan. The cast also includes Gohar Rasheed, who has given a solid performance as Mannu’s villainous husband. While the serial is may be losing its edge for some, the approaching entry of a strong actress like Aisha Khan promises to bring the zing back into the story. Will fate ever allow Salahuddin and Mannu to unite?  Perhaps Shakespeare has the answer “The fault, dear Brutus, is not in our stars,
But in ourselves,”

This is everyone’s guilty pleasure. Staring model Mishaal Fayaz and Noor Hassan, the lead protagonists suffer a complete reversal in fortune and live a life of misery and poverty because they disobeyed and disgraced their parents by running away to get married. Putting some of the more ridiculous plot points of this morality tale aside, the tight direction from Ilyas Kashmiri and strong performances make this addictive viewing.

The story till now has been an unending saga of one crime and ten episodes of unlikely punishments, but the screen chemistry between the lead pair makes this drama worth watching every week. There are a  lot of bonus quirks to watch out for ;the way the couple eat biscuits because they have no money for food ,but Noor Hassan never runs out of volatizing hair gel and Mishaal Fayaz always has manicured nails . Ahmed Zeb and Farah Shah round out the cast and balance the story with some good performances.

This is a simple, well made drama that with a fantastic script and excellent direction from Furqan Khan, proving  that lavish budgets aren’t necessary when everyone is at the top of their game. Mehar Bano loses her husband to the manipulations of her psychotic sister in law Fari. When Fari’s ex fiancé Hassan turns up and starts to fall in love with the beautiful young widow, Fari must find a way to get rid of Mehar Bano.With fabulous performances from both Ushna Shah and Faryal

Mahmood, this drama is a thriller in disguised as the usual gheralu masley masaiyl.

This Tv one drama was originally titled NigharKhana or studio in English. It melds many famous scandals and histories surrounding so many of the iconic figures from both Bollywood and the heyday of Lollywood. This two season serial provides a window into the world behind the glamour of the silver screen and gives much needed perspective to the burgeoning New Pakistani cinema of today.

Tum Kon Piya is an adaptation of a novel by Maha Malik. So far the story has followed traditional, sugar coated lines. After her phenomenal performance as the haughty Farah in Pyarey Afzal, Aiza Khan is back to playing the perfect, good girl who looks after her sisters and widowed father.

Imran Abbas plays the loves struck boss’s son and like so many other dramas these days it’s the interaction between the lead couple which is the high light of the drama. Imran Abbas is in great form and with Yasir Nawaz’s expert direction the promise for a great serial is there.

This serial gets to the heart of some deep set cultural issues like caste and honour killings. Danyal Raheel’s character falls in love with a girl called Taban, played by Ushna Shah, who comes from an extremely conservative, closed minded family who only marry within their cast. Taban hardly knows of this young man’s existence let alone obsession with her but her family punish by forcing her to marry her sadistic cousin, played with skilled menace by Ali Safina.

In desperation Taban runs away and finally meets the cause of all her misery. She can no longer return home and fears for her life. This drama boasts a well written script by Saira Raza, good direction by Adnan Wai Qureshi and stellar performances by Ushna Shah, Danyal Raheel and Usman Peerzada as Taban’s father.

Dramas to watch out for:

Mor Mahal (Geo- to be announced)

After Humsafar and Sheher e Zaat , great things are always expected from a Sarmad Khoosat directed serial . This is a tale of two Sarmad’s , the second one being acclaimed author , poet and director Sarmad Sehbai who wrote this Mughal era script some years back.

The producers have done their best to keep this historical saga authentic by shooting scenes around the famed Lahore fort, accurate period costumes and sets. . It boasts a talented, cast of household names like Hina Bayat, Sanya Saeed, Meesha Shafi and fresh faces like: Uzair Jaswal, Umer Naru Shah Fahad, Mehar Bano and many more. Though teasers can often mislead, the fabulously subtle insights given by the trailers for Mor Mahal make it a sure bet for the must watch list. The only downside to what looks like a blockbuster serial might be that such stories lend themselves too easily to overacting and melodrama. Hopefully Sarmad Khoosat’s magic touch has kept a tight rein on such tendencies.

After Rehaii, this is Farhat Ishtiaq’s ( writer of Humsafar and Dayar e Dil) second serial in collaboration with the NGO The Kashaf foundation, along with a grant from the Canadian Government. Rehaii was a brilliant drama about the evils of child marriage, and Udaari is also about the very serious topic of child abuse and sexual assault. Pakistani dramas have never shied away from broaching tough subjects but such subjects must be handled with respect, knowledge and aesthetic sense.

Director Ehtashamuddin handled a similar story in the serial Sadqay Tumharey and managed to avoid any overt sensationalism without losing the any of the impact. Udaari stars the talented Ahsan Khan in a negative role opposite Sammiya Mumtaz, with Bushra Ansari, Farhan Saeed and Urwa in the leads.This serial has a musical theme and there is the promise of some great songs from Farhan Saeed as well as a powerful story .Farhat Ishtiaq is known as the queen of romance and hopefully this too will be as powerful and compassionate as her previous work. It also makes for a welcome change in direction for Hum Tv which has spent the previous season presenting rapists, abusers and stalkers as heroes in their serials. Another one to add to the must watch list.

Intezar (Aplus-date to be announced)

This drama is written by Asma Sayani the author of Piya Mann Bhay and is directed by Kashif Nisar, whose credits include Ullu Baray Furukht Nahi and Sangat.

The star cast includes Mikaal Zulfikaar, Sana Javed, Azfer Rehman and Annum Fayaz. The story is about the life of a woman who faces many difficulties because of her life choices and how fate can turn anyone’s life upside down.

Besharam (ARY Digital To be announced)

The story is about two people from two very different worlds and how fate brings them together. It stars Saba Qamar in the glamorous avatar of a fashion model with Zahid Ahmed as the male lead. Zahid’s character is from a family who disapproves of modelling as a career and while Saba’s character has made her name in this field. This serial might be worth watching if it avoids simplistic, black and white characterizations and allows the audience enough nuance  to make their own judgements.

The promos show some interesting parallels to the Bollywood movie Fashion .Besharam is directed by Farooq Rind who has  Gul e Rana and Jugnoo to his credit and written by Sarwat Nazir who wrote dramas like Daag , Shikwa and many more

This drama showcases the fresh pairing of Faysal Qureshi and Arij Fatima. This is the story of a normal, fun loving, laid back girl who isn’t the usual domestic goddess

. Her marriage to a more introverted, serious man is becomes a challenge for her. How do such different personalities change and accommodate each other? Will their marriage even last? Find out in this drama written by the prolific Faiza Iftikhar.

We are all still waiting for Hum Tv’s magnum Opus. This drama is directed by Haissem Hussain, written by Farhat Ishtiaq and stars Mahirah Khan and Armeena Rana

Another one to wait for is the amazing Mega serial about Sadat Hassan Manto’s life and stories. This serial is directed by Sarmad Khoosat and stars Sarmad Khoosat, Mahirah khan Faysal Qureshi, Imran Abbas and many more 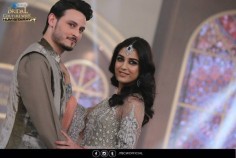 This yet to be completed drama is much awaited by the fans of Dayar e Dil couple Maya Ali and Osman Khalid Butt and Hareem Farooq. Sanam is directed by Haseeb Hassan