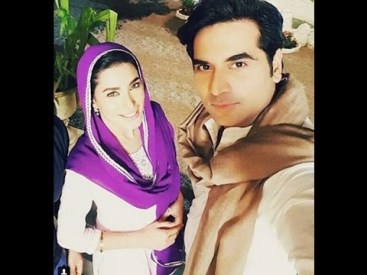 So, Anmol goes to her Valima dressed in black. If it was just a fashion choice perhaps it might have passed but for this young lady it was just another shot in the war against Mohid. I know so many people are finding it hard to relate to Anmol because women are trained not to see themselves as tough or hard. In Dayar e dil I was mad at Faraa for giving Wali a hard time , In ZGH I was annoyed constantly by Kashaf’s perpetual chip on her shoulder and I was even a little miffed at Khirad not sharing My Asher’s peanuts ( I have to admit that really was the worst). Anmol is already on the annoying list for laughing at what she thought was Sabha’s disgrace, not because of how she treats Mohid. Anmol is not only letting her mother down but looking for weak points in Mohid’s family as a source of revenge. I hate to say it but for a lot of women this kind of behavior is just in their DNA.

Anmol is both more intelligent and perceptive than her mother and sister something which has given her control of their little household for most of her life. I noticed there was a lack of camaraderie among the women at Anmol’s house hold and it shows even more now. A strong or empowered women isn’t about pulling other women down, it just isn’t about becoming the oppressive force yourself. A strong woman lifts up those around her, she doesn’t use other women’s failings or weak points as a stepping stone either. Anmol is going to learn the hard way that becoming Mohid, (or at least who she thinks Mohid is) will not bring her the resolution she seeks. She lost her temper and in a fit of supreme over confidence made the incredibly rash decision to marry Mohid for a reason and she might call it revenge but it looks like something else to me. If she really just wanted to thwart Mohid , wasn’t the best solution taking the Qazi to hospital to marry Farid? One thing I do love about Anmol though is she hasn’t crumbled or become romantic about flowers , mehendi or any of the other silly reasons to like someone . when and if she does dcide on someone it will be based on something solid .

Mehwish Hayat and Humayoon Saeed really do have great chemistry and look good together. I still don’t feel sorry for Mohid but I notice he really does care for the people around him, which would make him a better person than Anmol If only  he hadn’t forced his way into her life so disrespectfully. Imran Ashraf and Humayoon Saeed Jodi is absolutely fabulous too. I am always waiting for their little moments together. However, the stand out superstar of the show is Saba Hamid. This week she was in brilliant form , all those little digs at Anmol’s defenseless mother , the attempts at putting her unstoppable Bahu in her place and the quick “cover ups” for the little difficulties which keep turning up to poke holes in her image.

As I said in the beginning of this review, people are finding it hard to connect with Anmol, well me too! However, I have enjoyed every episode so far, it’s such a wonderful exhilarating ride.. Like getting on a rollercoaster! The story is so filmy; I wish that the makers had used better lighting. Sometimes it’s too bright and sometimes too dull.