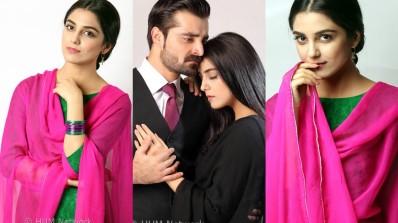 When Mann Mayal began it had all the hall marks of an old fashioned love story: two simple, small town protagonists torn apart by wealth, misunderstandings and the usual slings and arrows of cruel fate. Although Mannu (Maya Ali) loves Salahuddin (Hamza Ali Abbasi), he cannot muster the courage to ask for her hand because he is from a poor family. At her parent’s request Salahuddin persuades her into a disastrous marriage to Mikaal (Gohar Rasheed). After thirty episodes of what had supposedly been a twenty four episode serial , Mannu is divorced and living at the now wealthy Salahuddin’s Karachi home while she endures a tug of war over her two children with her abusive ex-husband. Adding even more confusion to this mix is Salahuddin’s obsessive, lovelorn secretary and all around villain Jeena (Aisha Khan) who will stop at nothing to make Salahuddin her own.

Mann Mayal has seen a steady decline in quality, a weak story line and an even more deficient script have turned what were initially well drawn characters into strange, erratic creatures that jump from one stance to the next without rhyme or reason. The ad hoc addition of a new twist every other episode to keep this story limping along may confuse faithful viewers but it makes perfect sense to team Mann Mayal, for whom this serial has been the ultimate cash cow.  The villainous Mikaal has undergone no less than three transformations so far, from a normal young man happy to marry Mannu, then drug addicted, partying gambler who couldn’t care less if his children or his parents died, to a loving father who wants to keep his children, to hopefully his final avatar, as repentant sinner conveniently dying of a mystery illness. Similarly Mannu was once the typical bholi larki so beloved of TV audiences, making silly jokes, bumping into flour sacks and visiting the now requisite mazar to pass her exams, then she was a  broken hearted lover before a sudden switch to good (?), mashriki wife who abandons her duppattah and prayers to keep up with a “bad boy” ,partying husband. Some six years of an abusive marriage, two children and a divorce have not matured her, instead she has come full circle; back to bholi larki mode, unable to cross a road or travel to her parents’ house without an accompanying adult.

Episode thirty was yet another example of some really choppy editing and director Haseeb Hassan’s lack of grip on the story line. In last week’s supposed cliff hanger, Mikaal had kidnapped Mannu’s children (at Jeena’s instigation). He then declared Mannu could never see them unless she came back to him even inf it was just as the children’s Ayah. Despite their divorce, and the existence of lawyers and courts in Pakistan, Mannu agrees , but Mikaal suddenly changes his mind at slams the door in her face. Mikaal has a habit of slamming doors in Mannu’s face but for some strange reason he never slams the door in Salahuddin’s face,he even turns up with the children for a meeting straight after refusing Mannu. Stranger still, he just as suddenly refuses Salahuddin’s offer of financial support and the right to keep his children, giving them up in the space of two minutes and leaving with a blank check he won’t cash.

Instead of celebrating her children’s return, Mannu hugs them before sending them away and getting into a nonsensical fight with Salahuddin about “buying” her children and “pushing: her husband out of the way because Salahuddin knew he needed money all in a grand scheme to make her his slave. Mannu and Salahuddin’s fights are increasingly tiresome and represent a sad, last ditch attempt to create some sort of chemistry between a lead couple that could not muster a single spark in a this tortuously long on screen relationship. This is not the first contradiction in a relationship that defies a lot of conventional values. Mannu maybe a good Mashriki larki but whenever she needs help her ex-lover Salahuddin or his servant Jamil are always on hand to help. When Mikaal throws Mannu out, in a logic defying move she actually takes Salahuddin to help her patch things up, an action which inevitably leads to divorce.

After her divorce Mannu is supposedly in Iddat which traditionally allows a woman a time of seclusion after a divorce but she is forced to spend it in her ex-boyfriend Salahuddin’s house. Far from taking time out to think or contemplate on her situation Mannu is constantly in Salahuddin’s company. There has even been an episode in which Salahuddin orders his servant Jamil and then fiancé Jeena out of the house so he can spend some  “alone-time” with the freshly divorced Mannu , surprising her and her children with breakfast in bed in a breach of privacy and curtesy which would be shocking in real life. Even more curious is the way Mannu’s parents won’t help their daughter in any way. In fact her entire family ignores her completely, treating her like a pariah and shutting her out after her father’s heart attack in case she causes him a relapse, reinforcing the notion that divorce somehow degrades a woman’s status. All of these forced situations are geared towards giving the lead couple Salahuddin and Mannu maximum screen time and up the romance quotient , except that there is little romance to be found in the endless misery this story involves.

Maya Ali had been the saving grace of this serial , putting in a steady performance for the majority of episodes but recently even her portrayal has sunk to the same level of lack luster mediocrity as Aisha Khan and Hamza Ali Abbasi. Similarly Gohar Rasheed has given a patchy performance but with enough highs in his limited screen time to just about cancel out the lows. For quite a few episodes his Mikaal was the only character in this serial whose motivations could be understood but that was not to last long. Even more disappointing; a talented actress like Aisha Khan has not been able to breathe life into a caricature like Jeena, whose obsession and complete lack of self-respect have reached  levels of notoriety that would make Sara from Humsafar blush.

While Hamza Ali Abbasi is most definitely the “star attraction” of this serial, his portrayal has been very uneven and failed to fulfill the promise of his controlled performance in the beginning of this serial. Salahuddin is  typical of writer  Samira Fazal’s heroes: looking back at Hassan of Dastan , Mujtaba of Kuch Pyar ka Pagalpan ,  Salman of Vasl , Shaam of Shukk, Aazer of Chup Raho, they are all likable and caring  but, essentially weak , indecisive men bordering on unfaithful – always ready to get engaged or married to the next best option. Like all the actors playing these characters, Abbasi has indeed made Salahuddin a lot more palatable but he has not given him the depth to make this character’s troubles relatable, leaving the impression of a concerned older brother rather than a lover silenced by circumstance. Beneath the mess of contradictions there is a deep vein of guilt that motivates Salahuddin’s character, something that Abbasi to his credit has tried to show but the director has failed to focus on.

Next week’s promos show Jeena poisoning Salahuddin which has set twitter ablaze with speculation as Abbasi’s army of fans pray he doesn’t “die “ like he did in Pyarey Afzal . A phenomenon which may explain why this serial hits the top of the ratings every week despite all its flaws and inconsistencies .Apart from  Hamza Ali Abbasi’s star power, there is also the tendency of people to watch a drama till the bitter end once they invested in  enough episodes even if its underperforming. The last but perhaps the most likely reason is that the masses simply love a mazloom aurat story, with lots of good looking people making disappointed, majboor faces at the camera. While it’s easy enough for critics like me to dissect a drama’s bad points to pieces, the silent majority are happy to turn up in front of their TV screens at the appointed times and make Team Mann Mayal lots of advertising revenue .So, while MannMayal is an undeniable, runaway commercial success it will not have the repeat value or iconic status that Humsafar, Dayar e dil, Pyarey Afzal, Dastan, AunZara or other great iconic serials have . It will go down as just another pot boiler that made a lot of money, which is shame because this serial started off with a spark of brilliance.

this review can also be found in  Dawn