Another enjoyable episode of Bin Roye But there were a few weak links this week .I just cannot get my head around Saman’s character. Saman Just lost her parents but being a happy, well-adjusted girl she harbored no resentment to her birth family for giving her away. This much I can accept but the placid way she just moves to Pakistan, and leaves her life in America is strange. I was waiting for Saman’s character to unfold, but so far she doesn’t have a personality and just exists as a counterfoil to Saba. 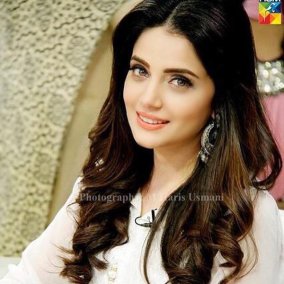 Yes I can see Irtiza’s growing attraction to Saman: both are sudden orphans, both like reading and both are thoughtful and caring, but who is Saman? If anyone has read the novel please tell me if the original story is as scant on detail as this. While a few descriptive phrases can work in book, a lot more is required for the screen.  I have yet to see Saman express a preference for anything or have any independent thought.  Armeena Rana is not the most expressive actress either but she is definitely doing better in the serial than the movie.

Meanwhile Saba is growing up. She has lost some of her more childish traits and happily open’s her heart to her new sister. Saba is just so open, yet lost in her own world, she doesn’t realise why Irtiza is constantly coming home early or see the connection that he has already formed with Saman. I know the story is being told from Saba’s perspective so it’s easy to feel protective of her.  As always the camera loves Mahira Khan, who seems to have been born to play Saba. Mahira is fabulous in this simple avatar and at no point does she fall into the typical bholi larki cliché. Saba has a mind of her own and makes her choices with passion. She is so sure that she and Irtiza are meant to be, she has never even considered Irtiza might have a different choice. Every scene she is in is a sheer delight, and keeps the heart of this story beating

Humayoon Saeed looks strangely suppressed and subdued as Irtiza and no, I cannot see what Saba sees in him. I saw the way he hesitated before reciprocating Saman’s desperate when he arrived in America and think that might have been a deciding moment. Irtiza is a very kind person and he may feel very protective about Saman but although Armeena and Irtiza may share long glances they don’t share any chemistry. It is a huge contrast to the electricity generated when Humayoon and Mahira are on screen despite the fact Irtiza hardly looks at Saba except to pet her in passing like some kitten.

Despite the some of the editing haphazard editing and an overdose of lip gloss I still enjoyed the show. The lip gloss looked extra weird because Mahira seems to be sans makeup and her very natural freckles and are there for all to see. Needless to say, she still looks so beautiful.  I think the most moving scenes were between Saba and Saman; their bonding was so sweet and thank goodness that there wasn’t any ridiculous sisterly competition. I would have liked to see Zafar connecting with his sisters too but so far he seems doomed to be a side issue.

Director Haissem Hussain really knows how to capture all the silent beauty of family life. I just love how the scenes were lit: the interplay of light and shade, the casting shadows on Irtiza and Saba’s faces, the cool sanctuary of the house and the bright glare of the outside, are all so evocative.  There is such a wonderful ease in the way they the actors interact, and the way the story flows that even those who have seen the movie are waiting for each new episode with the as much excitement as those who haven’t.

Ok someone anyone tell me how I can get Saba’s clothes. Those printed salwar’s and plain shirts now haunt my dreams.