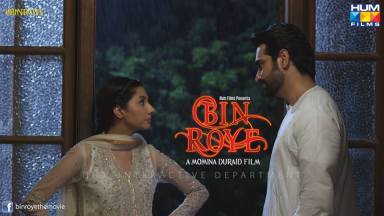 I think I have been waiting for Bin Roye since Humsafar ended and when it did finally arrive, sans Fawad Khan, a story everyone knew and a veritable baraat of directors attached to its name, I wasn’t expecting much. However with each episode it has surpassed expectations, and this week’s episode was just so ‘next level ‘it brought on that whole obsessive Humsafar feeling I had been missing since Dayar e Dil ended.

Saba sat through a game she knew she was losing, and still she tried to buck herself up, rationalizing, pushing and hoping till the inevitable final blow when she hears Irtiza declare his feelings to Saman. Mahira Khan was nothing short of magnificent, every twist and turn of Saba’s feelings was portrayed with heart wrenching depth. It might have been easier for Saba if she had been allowed the luxury of hating Saman, but fate will not give her even that small salve to lessen her pain because no one can hate Saman. Saman is a lot like Irtiza, caring, unendingly kind and so completely artless that being angry with her would be as pointless as setting fire to a butterfly. Armeena Rana’s portrayal finally had some energy to it and brought Saman to life.  I don’t think Saman is written as a very authentic portrayal of a Pakistani American girl, but just taking her role as Saba’s older, more sophisticated, more mature sister on face value it  works. Armeena has justified her role and was looking just right sitting next to Irtiza at the engagement.

I just love how this story unfolds from Saba’s perspective; everything the audience sees is at her eye level and gives the full effect of all the alienation she is feeling. Irtiza and Saman are lost in their new world as a couple while Saba’s parents are busy trying to make up for Saman’s loss. The scene at the engagement illustrated it perfectly, the special connection between Saba and Irtiza quietly closed just as  Saman and Irtiza became an exclusive party of two. No one except Dadi understands Saba’s pain, to the rest of her family Saba is just the spoiled baby who may miss having Irtiza to order around.  Bigul Hussain is a  lovely, wise dadi , who is the backbone of her little family . There are so many beautiful people in this serial, but Zeba Bakhtiyar is exceptional. I get the feeling Saman takes after her while Saba is more like her father and grandmother.

We are so used to thinking of Haissem Hussain as the director of an epic like Dastaan( and of course his romcoms like KPKPP, Aik Naeey Cinderella, AunZara and Akbari Asghari) that the intimate style he has used for Bin Roye comes as a pleasant surprise. I don’t think this story could have worked otherwise, and might have turned into just another story of unrequited love. I love the old house Saba’s family lives in, it’s almost a character in the story and the wonderful use of shadow and light used to pick out the protagonists feelings .The styling on this serial is really part of the charm, it’s great to see the natural flesh tones of all the characters rather than the bright white “we all shared the same bucket of paint” look that is becoming increasingly fashionable. The character’s clothes also seem to be part of design; all those cool whites and soft subdued colors blend into the mood of the story so well.

Farhat Ishtiaq gave us some beautiful scenes toda:. Saba trying to take Saman’s perfume and then walking it back,her idea to send Irtiza a note telling him how she felt and finally her decision not to be the Hasid..(the jealous one) .

There were some great performances all round and this week Humayoon Saeed abandoned his usual underplaying to fantastic effect. Irtiza looked like a prize this week, and most definitely a man in love. The scene of Humayoon sleepless on the balcony with an equally restless Saba was explained this perfectly but I am going to say my favourite scenes were Saba listening to Saman work out her feelings.

On the other side of the world Safeer in the shape of Junaid Khan is secretly married to Sonia. Personally I want to slap Safeer and Sonia, Marriage isn’t a joke it is a social contract. If you love each other tell the world.  Safeer is a typical mummy’s boy and Sonia should not put up with this kind of second class treatment.  People of different religions get married every day, in this day and age it’s a just coward’s way out for Safeer.

Next week Saba gets to dance with Adeel Husain as a consolation prize … what more do you want woman?

Ok again as with Last week, I am not sure who directed what, if I get my lines crossed, please accept my apologies. My guess is Safeer and Sonia’s scenes belong to Shehzad Kashmiri and the rest to Haissem Hussain. Either way team, Bin Roye take a bow, this was one of the best episodes yet.