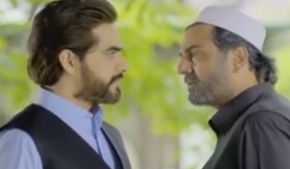 This had to be one of the best and perhaps most shocking of Sange Mar Mar episodes yet. This serial is going from strength to strength and despite the best efforts of the Hum Tv promotional department to ruin and destroy the suspense or annoy the viewers with misleading cut and it manages to maintain the thrill ride every week.

From last week, we knew beychara Saif ur Rehman was a dead man walking, the Machiavelli of Swat, Tora Khan had set an invisible Bull’s eye on him, but it still came as a shock when the moment of truth came . Syed Yorgic Tipu Sharif gave us a heart-rending ending to this troubled man’s life. He was brave , he was afraid and everything in between. All the emotions between acceptance and hope were on Saif Ur Rehman’s face in the space of few scenes and  he deserves a round of solid applause for his portrayal !

Being at heart a good man, Saif Ur Rehman knew he was wrong to kill Gohar with no proof and he knew his actions would catch up with him eventually but like any human being he had excuses and he had hope that maybe just maybe things would work out .I was so glad that he did the honorable thing and refused to cower though he was shaking and defended his sister to the end.  Meanwhile Omair Rana totally nailed it as easily led Safiullah, who quivers with fear and looks for affirmation from his mentor Tora after killing his own brother in law. There was a world of fear and confusion in his expressions as the false bravado wore off and the reality of his action sank in. what a scene full of tension and sheer dread in every moment. Then Tora Khan takes swift action, killing two birds with one stone! Masroor Paras’s portrayal, just like this story, never disappoints!

There was another shocking death this episode, Gulalay loses her life in a freak accident stepping out of the car. Both Husband and wife, who couldn’t bear to be parted, united in death. All the plans they had left unfulfilled. Tora has succeeded in ruining all of Gulistan’s well laid plans for everyone’s lives, all Gulistan Khan’s pretentions to absolute power and control laid out as futile and fruitless by the only hand that matters. Brilliant acting from Nauman Ejaz, Mikaal Zulfikar and Sania Saeed made the last half of this episode heartbreaking. The best parts were the small touches which explained everything without a word of dialogue. Gulistan considers his youngest son a tiresome nuisance but now he is all that is left of the future he had envisioned; one glance from Nauman Ejaz said it all. Similarly, Aurang’s life as the “extra” is over, he is the only son now and realises that whatever he thinks of his father he is the last “support” left to him. Then there was Sania Saeed as the grieving mother , who can rule the screen with just her expressions .

They say the first murder is always the hardest; after killers tend to feel even less remorse. Tora Khan has gained more confidence with so much success and I have a feeling he is setting his sights on Aurang. The way he was hinting at “the Third Man “reminded me Hitchcock’s movie of the same name, except we all know  Tora was the third man.

I hate to assign motives to the writer but for me this whole story is a much needed indictment of ghairat and honour culture. I noticed how Bul Bul , manages to blame Shireen for the whole blood strewn mess , claiming Shireen’s actions had caused all these deaths . How incredibly evil and shameless this character is and how easy it is blame a woman. The only person really paying for her actions is Shireen’s spiteful bhabi played to perfection by Kaif Ghazanavi. Perhaps this will move her to tell the truth? With neither brother nor husband, what will happen to Shireen?

This is such a brilliant I could write forever but now limit myself to thanking the wonderful cast, director Saife Hassan  and writer Mustafa Afridi for this enthralling piece of television. So many great dramas this year Dillagi , Udaari, Khuda Mera Bhi hai , Noor e Zindagi Bin Roye that I feel as if its 2012 ..When I was watching Humsafar, Durr e Shehwar, Daam and Kuch Pyar ka Pagalpan.

Despite all the misery and shock I still noticed no one can touch Mikaal’s hair. It has a special place in the space time continuum and cannot be touched. Anyone who doesn’t believe me; go back to Sheher e Zaat and Dayar e Dil.