It’s no secret that I’m a close watcher of the Pakistani entertainment industry . Whatever my intellectual or moral pretensions are , the odd Meera joke is funny , the odd Tahir Shah Meme makes me smile  but mostly I end up disappointed at the level of discourse under the facebook posts and sometimes in the newspaper headlines . So it was a pleasant surprise to see this very public conversation play out : 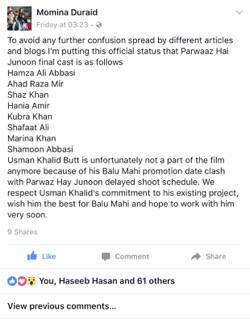 When Hum Tv first launched their project Parwaz  hai Junoon , Osman Khalid Butt was very much part of the project , but a recent update showed his name missing from the cast list and the addition of a new name :Ahad Raza Mir .  This led to a lot of speculation till it was finally cleared up . While I congratulate all three parties on the civil level of discourse , I think the older generation who have been in the industry much , much longer could learn a thing or two from the two young actors who refused to be part of any petty competition. Both OKB and Ahad Mir showed a lot of class and sensitivity .

Make no mistake this wasn’t just a flash in the pan , PMHJ is one of the “big project” movies that might make or break Pakistan’s fledgling Film industry , so there were some high stakes at issue  :both in terms of reputation and money. Wouldn’t it have looked more professional if Hum Tv/Momina Duraid  or Haseeb Hassan  had made a clarifying statement from day one  instead of playing catch up ? Hum Tv is one of our leading production houses , wouldn’t it be great if we saw actual proof that there were professionals with actual MBA’s working there ?

Putting that to one side I am still looking forward to seeing Both BaluMahi and Parwaz  Hai Junoon . OKB is a proven , talented actor and now  I am really excited to see Ahad Raza Mir in his upcoming projects too.  The Pakistani film industry is on very wobbly legs right now and needs all the support and nurturing we can give it …. more on that later