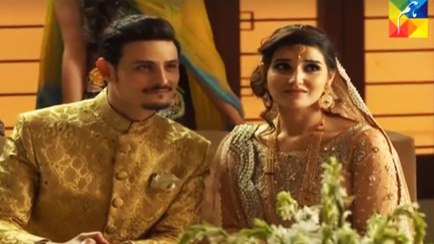 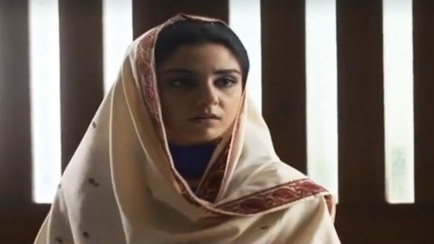 There are some episodes that are just pleasing to the eyes, ears and heart. Osman Khalid Butt wrote a smooth end of Sanam serial. The story and drama started on a fine note but most of the middle part made no sense whatsoever. Sara’s character conveyed nothing positive or sure real, not even her bechari lectures. This twist didn’t work at all. The most interesting character has to be of Ayla, a Bipolar patient. Hareem Farooq pulled of the character well in the beginning and in the last episode.

The concentration over her character remained choppy but at last it was good to see her motivated and trying hard to gain her mental stability back. In this installment I loved all of her scenes, they were written nicely and precisely. We finally witnessed her depressive episode and all her struggles regarding the treatment and her demand of self-identity were aptly shown. Harib finally stood up on his feet, he realized the miserable condition of Ayla & that she feels dependent over him because earlier Harib and Ayla shared a good bond and he is the one who listens to her. The conversation was surely a powerful scene, the way Harib calms her down, apologized and then became her strong confidante was a beautiful message in itself. Harib found the love of his life, he had struggled alone a lot and now he is happy to have a partner who understands, love and supports him so much. Him accepting his flaws and trying to amend them is another message being conveyed so well. Aan was one of the most sweetest yet strong (minus some bichari halaat Ki Mari situations) character. She is a person with a positive intentions and thinks of the welfare of others. It was a nice sight to see a woman who isn’t a husband stealer or the evilest woman alive on earth. She made some wrong decisions but at the end her self believe and good nature makes it easier for her to go through all troubles and lead a peaceful and successful life with a partner whom she loves the most. One more important scene was the sweet reconciliation between Ayla and Aan, it would be nice to see some of the conversion that happened.

Always love watching Maya and Hareem onscreen and their chemistry is adorable to say the least. Aan realizes the need to clear out all the blues between her and Ayla so that Ayla can move ahead without any fear or guilt. The time Aan took before confronting Ayla is a subtle detail,perfectly weaved in the narrative. Surely a great sight to see one woman supporting another without any secret grudge or false aims. Aan’s Tayya Abbu took a ticket to UK to attend BaluMahi special screening, his absence excuse from Nikkah ;). The concise,oh so enchanting and charming romance between Aan & Harib was nothing short of a delight. *Puts Hand at heart and faints* As mentioned earlier Hareem did an amazing job in this installment.

OKB acted well but for me his complete & comprehensive writing wins today. His chemistry with Hareem was good in some bits and always a winner with Maya Ali, simply no argue in this case. Direction of the serial was all nicely done. Script has a lot of loopholes but the magical powder sprinkled by OKB just made things better for the sore eyes. All in all Sanam serial has finally ended. I hope my readers have enjoyed my five reviews over it.

See you all soon and your feedback means a lot. Take good care of your self and all around you.

NB MZ started her Sanam reviews at DramaPakistani , but since Faraz has shut down operations , Here it is The finale .Thanks MZ !!