Directed and written by Shoaib Manzoor

Verna has been getting mixed reviews and I had no particularly high hopes of this movie despite the fact that was directed and written by the legendary Shoaib Manzoor, maker of the unforgettable Khuda kay leeye and the hard-hitting Bol.  My perseverance paid off , I would say that this was one of those rare movies that not only delivers  at every expected level but forces the viewer to think out of the comfortable box of expectations and norms that we use to anesthetize ourselves from some of the horrors of  life .

Rape shouldn’t be a part of everyday life but even a cursory glance at the news headlines will show any thinking person that these unpleasant realities of sexual assault are there, just at the periphery of our vision . Sexual assault as a weapon of war is used to humiliate  and subjugate entire populations , while  sexual harassment is used  to control and dominate women in supposedly more  civilized  settings. Critics maybe  shocked to see a rape victim shaking with anger , determined to seek justice no matter the cost but that is the story of  Verna . 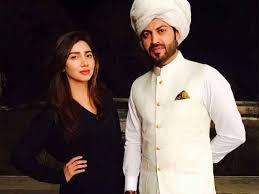 Bathed in cool blue light , Shoaib Manzoor gives us an unrelenting thriller , arming his heroine with all the purpose and righteous anger usually reserved for a male protagonist . A woman abducted on a flimsy excuse , tortured and raped for three days before she is returned to her helpless family like a used piece of furniture . Mahira Khan is nothing short of magnificent as Sara , her pain , her distress are the fire which forges the steel in her soul . She not only wants her life back , she wants her honour and reputation back . A woman who refuses to immediately forgive her rapist for the sake of her family , a woman who refuses to weep herself to death or for  one moment allow herself to be guilty for anything , no wonder  some people are confused . These trappings of independent thought and sheer stubborn will are not usually allowed to women . They must plead , they must tremble , they must suffer and if they don’t they are cast as unnatural , “ victim as warrior “and the list goes on because dignity and honour are luxury reserved for men. Mahira Khan has delivered a mesmerizing performance, carrying  the entire movie on her very able shoulders and from the initial box office reports it seems as if the public agrees .

This film has some fantastic performances and the best surprise is Haroon Shahid whose debut performance is a simple but highly effective portrayal of a man lost at sea . He truly is an everyman : a little weak , a little flawed but ultimately better than he supposes .He is racked by doubt and inadequacy so he  fills  the gaps in his own understanding of the situation  with anger and frustration . However , as with any good man he steps up and rises to the occasion pushing aside his deepest fears to support his wife . Zarar Khan essays  a well practised, very convincing performance as a chilling villain ; the  childishly, cruel feudal son , convinced of his own singular importance and  the right to dominate lesser mortals .His studied cool and lack of concern is the true heart of darkness in this movie.

The systematic collusion of government, police and courts that is shown  is nothing audiences are unfamiliar with . Yet it’s not the court system which defeats Sara’s attempts at to get justice but her own family’s desperate attempt to mitigate the disgrace . The feudals and politicians are not weighed down with notions of propriety and virtue , they don’t waste time in introspective self-flagellation , like the so-called Shareefs. No Mullah questions their son’s mode of dress or behaviour. There are a several memorable dialogues in this well written , highly efficient script  that hit right to the heart of the matter .

“We have all  heard of the rights given to women by Islam , but when will Muslims actually  give those rights to women ?”Asks Sara , outraged at having her character publicly evaluated by the lack of a headscarf on live Tv .

“My importance as a woman is in one area of my body” is another line that caught the essence of Sara’s predicament.

Shoaib Manzoor’s script  makes its mark without the use of the kind of flowery Urdu and lambey dialogues about Mohabbat and emotions that we are used to. Its spare , sharp conversations get the point across with ease,setting the tone for a movie which sets a relentless pace . That’s not to say the movie is flawless . A lot of the songs could have been trimmed and with some crisper editing the film could have been much faster paced and shorter by about  twenty  minutes.

Another downside is the way Verna  continues the Pakistani drama tradition of rape  victims with distant fathers and cold , emotionally unavailable mothers who share no rapport with their children. Instead of comforting or protecting their daughter the parents are more worried about their public image , no girl with Sara’s high self-esteem and courage could possibly be raised by such insects. Perhaps the most  difficult point for me to swallow was that Sara would allow the villain access to her one more time in her quest for justice , but women can be just as ruthless and self destructively angry as men when pushed far enough.

There are a few plot holes and some convenient leaps of faith that the storyline makes but overall it is a thrilling  movie with a strong message that is not to be missed .  Shoaib Manzoor has made a fascinating movie , a genuine Pakistani film noir with a shocking but satisfying end . Sometimes a girl has just got to get up and do it herself .