Despite winning accolades for his work on award winning drama serials, director Mohammed Ehteshamuddin seems oddly surprised, “I started working on serials late in my career.” A soft-spoken man with an air of quiet patience, he often seems lost in his own thoughts, and deflects any praise for his body of work that includes theatre, drama, and films in multifaceted capacities as actor, writer and director.

Theatre was where he honed his skills even if he considered it a hobby at the time, but he traces his interest in stories back to his childhood days growing up in Karachi. “I grew up in a colony where a lot of the residents were migrants from Hyderabad, India. I was lucky enough to be surrounded by some very highly educated individuals: recognized poets, authors and writers of the time. They would sometimes rehearse their plays at our home. I learned a lot from them” he elaborates.

Inspired by these talented individuals Ehteshamuddin began taking part in literary readings, from classic plays to short stories and poetry. Surrounded by creative people who had taken a monumental leap of faith and moved to Pakistan, his focus on the historic separation from India seems only natural. With eight short films on Partition already under his belt he was a natural fit to direct Hum TV‘s much anticipated serial, Aangan, which paints a picture of the familial and  internal struggles of  those who went through those turbulent times .

“I consider the most prominent books on Partition to be Qurratulain Hyder’s Aag ka Darya and Aangan by Khadija Mastoor, which won the Adamji literary prize in 1962. It was wildly popular in its day. In fact, since we announced the book has sold out at many book stores and new editions are being printed” he adds. “Aangan  is quite unique, because the novel is from the perspective of the women who saw the whole Partition play out from their ghar ka aangan. The men come and go talking of revolution and change but there is no revolution or change within the home. They only speak of revolution outside the home” he elucidates. Aangan is considered by many to be one of the first feminist novels about Partition, highlighting the often  hidden, silent sacrifices made by wives, mothers, sisters and daughters during that period.

Does he follow novels to the letter while adapting them on the screen? He admits that though the essence of the novel remains, in translating the book to screen it has inevitably lead to some technical and sequential changes. “The novel starts in the present with important events explained in flashbacks. But to avoid confusing jumps in the timeline, those events have been presented in the first three episodes giving the story an easy to follow, linear progression” he explains.

The star-studded cast which comprises of Mawra Hocane as Aliya, the main protagonist, Ahsan Khan in a double role, Sajal Ali is Chammi, Ahad Mir as Jamil and Sonya Husain is playing Salma. Post Yakeen Ka Safar, the phenomenal popularity of Ahad Mir and Sajal Ali pairing is the some of the jet fuel behind the enthusiasm for Aangan and at times he feels the pressure mounting.

“Ahad Mir is a brilliant hardworking actor. People will love him in this serial too. Some people have a lot of expectations about his pairing with Sajal. My request to the audience is not to build that up too much. Watch the story and let characters unfold rather than rooting for a relationship. There is no black and white character; there are very nuanced grey shaded characters who are working their way through a very difficult situation” he says.Another exciting element of Aangan Ehteshamuddin reveals, is that the drama is planned as a three-part series spanning a number of decades. It begins with Khatija Mastoor’s original novel set in the forties and fifties, and writer Mustafa Afridi has imagined these characters on a continued journey into the 1980’s, and the 2000’s. It’s a grand project, which will require a lot of vision and planning but one that will be a landmark for Pakistani television when it comes to fruition.

Partition is a very sensitive topic and is often used on both sides of the border to retroactively reflect current political and cultural imperatives. How does he address concerns about fair representation? “Whether the author is Hindu or Sikh or Muslim like Manto, when we pick a story about the Partition, we choose those who have maintained a balance and not come down one particular side. This hijrat (migration) was not just one way” he maintains.

Ehteshamuddin is not one to shy away from dark subjects. From his most recent work as a director in Udaari, Sadqey Tumharey, Preet No Kariyo Koi and Aseerzadi which dealt with issues of sexual assault, political chicanery, religious piety and its manipulations, he always manages to take the story from the personal to the political, while integrating rural and urban life, and a feminist point of view. He decided to take up Preet Na Kariyo Koi  , when many directors had turned the script down as ‘difficult’. For him the character of Shagufta Shahzadi was the clincher, “For a man no matter what he does, he always has a way out but for a woman who makes a mistake the avenues are always closed. I liked that she was a strong woman and that’s why I chose to make it.”

While he mostly credits his luck to good writers such as Amna Mufti, Khalil ur Rehman Qammar, Farhat Ishtiaq and Mustafa Afridi, there is no denying his directorial touch. Each of his works has a sense of detail and authenticity that raises his work above the generic love story or melodrama and despite the grim topics there is a hopeful touch. “I had been labelled as a director that produced work with a darker edge” he says. His short film ‘Shah Rukh Khan Ki Mauth’ about an obsessive fan of the famed superstar is a case in point.

The film won an award at the Kara Film festival and  was a more bitter than sweet reflection on what the Ehteshamuddin calls ‘parastar’, or ‘those who worship’ .However his skill at creating scenes of warmth and  intimacy is undeniable after watching Sadqay Tumharey,  the doomed love story and  autobiography of famed writer Khalil ur Rehman Qammar. “Sadqay Tumharey was a play with beautiful dialogues. There was almost a war between the actors  because they knew how strong and  well written their characters were.  I was able to use that use that friction in each of their parts. It was exhilarating for me and especially for the actors because they had so much meat to their roles.” 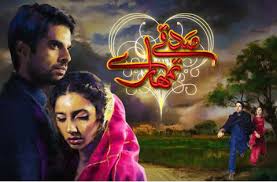 Portraying the sometimes fraught sexual politics of Sadqay Tumharay and Aseerzadi also stood him in good stead for his recent phenomenally popular award-winning serial Udaari . His presentation of the painful subject of child sexual assault, trod that often elusive fine line between upsetting conservative sensibilities that wanted to ban even the mention of such acts without sanitizing the shock and brutality of this crime.

Directing and writing are not Ehteshamuddin only talents, he has also delivered some strong performances as an actor on the both the big and small screen. He had significant roles in the movies Chambeli and Maalik, while more recently he essayed the role of the abusive father in Yakeen ka Safar. While discussing acting he smiles and wistfully tells us about ‘the one that got away’. He was originally slated to play the intriguing character of Tora Khan in the serial Sange Mar Mar  but due to conflicting date issues with Udaari, that role slipped from his fingers. “Paras Masroor did a brilliant job as Tora, but as an actor I cannot help but think how I would have played it” he reflects.

He hopes to get back in front of the camera, after Aangan wraps up, with a serial set in  the Saraiki belt of Sindh tentatively titled Firaun, and dealing with the issue of domestic violence. Does he hope that these topics will inspire his audiences to action and eventually change their fatalistic viewpoints to an optimistic and hopeful one?

“The most successful works of art are the ones that are not political but focus on the human emotions and sentiments of the characters and the trauma that ordinary human beings go through” he says. Eteshamuddin hopes that when we are able to empathize with each other, only then we can look beyond borders and biases to see ourselves reflected in each others stories.

Sadaf Haider and Sadaf Siddique are pearls of a pod, fellow freelance writers and drama buffs. Find more at sadafsays.com

This article was published in Dawn images