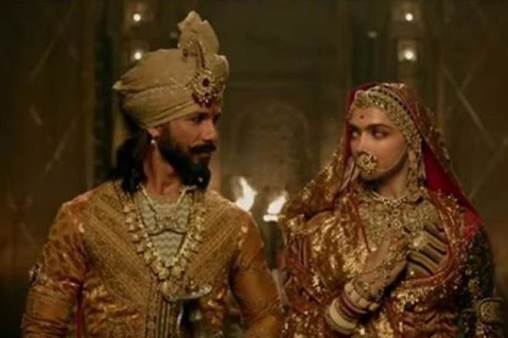 Padmavat is based on Sufi Poet Malik Mohammad Jayasi’s mediaeval poem, about the beautiful Sinhalese princess who becomes the wife of Raja Rattan Singh.  When a disloyal Brahmin is thrown out of the Raja’s court he seeks revenge by carrying tales of the Rani’s flawless beauty to the powerful Sultan of Delhi Alauddin Khilji, a passionate collector of all that he deems the ultimate in perfection.

This is director Sanjay Leela Bhansali’s grandest project yet, estimated whopping 200 crore Indian rupees, and it shows. Bhansali’s movies are known for their lavish sets and colorful imagery but Padmavat surpasses all expectations. The  CGI enhanced visuals of grand  battles , the soaring heights of the fortress of Chittor and glowing beauty of the palace interiors and the mystical jungle of Sinhala (Sri Lanka) all serve to fascinate and almost mesmerize the viewing audience, at least for a while . Just like the scenery , the wardrobes for Rani Padmavati ( Deepika Padukaun ) and Maharaja Rattan Singh (Shahid Kapoor) are another visual delight that the camera lingers on so much that at times one wonders if the Rajputs had spent more time in the battle field and less time dressing up perhaps they wouldn’t have suffered such defeats .

The final confrontation between Khilji (Ranveer Singh) is a prime example of the way details reduce some of this film to mere pantomime, Rattan Singh is dressed in endless layers of silk and decorative armour, while the practical soldier Khilji is ready without any ceremony. Then, despite the fact that it looks as if Shahid Kapoor’s tiny waist may be snapped in half at any moment by the well-built Khilji we are asked to believe Rattan Singh overpowered sultan only to be defeated by treachery.

Deepika Padukaun is a luminous presence on screen, and as far as her role is written, she fulfills her part with grace and restraint, while her undeniable screen presence carries the weight of the mythic persona her character represents with elegant ease. By the end of the story the audience realises that this beautiful, compassionate and intelligent woman suffers only because she married a fool. Shahid Kapoor has been given little to work with and does little with it, allowing him to be drowned by the writer’s lack of depth and the director’s lack of understanding. The Rajput fortress of Chittor is carved out of the harsh, heat baked terrain of Rajasthan and was hardly a center of urbane civilization or soft handed luxury. Any king there must have been a hardened, practical warrior, yet the Maharaja is presented as dandy, showcased in one decorative costume after another, whose hair is in constant state of impractical blow dried perfection, and a master at passing up on good chances to kill his enemies because he is so honourable or its not polite or it’s a Tuesday.

The lack of chemistry between the Maharaja and his Rani make their supposedly romantic interaction’s become tiresome at times, making it hard to drum up the kind of real connection to the characters and their dilemma’s that Bhansali’s previous films evinced. Just think of Hum dil de Chukey Sanam or Black or Khamoshi, or Devdas, each misfortune falling the lead pair tore at the heart whereas this curiously sterile relationship does little to stir the emotions.

While Padmavati and Rattan Singh have been relegated to symbolically virtuous figures, the wicked, unprincipled Khilji has been given a more interesting, if skewed character, which repels but at times fascinates. The historical Khilji was like most medieval rulers of his time a tough, often cruel and ruthless man but he was not a savage. According to historical record he was a civilized man according to his time, a brave soldier and clever tactician who saved India from the Mongol hordes 6 times.

The truth however would not fit in well with the current reactionary mood of India’s  right wing nationalists , who wish to retroactively rewrite history to suite their present. The makers of Padmavat have shamelessly played into the narratives of extremists casting the Muslim Sultan of Delhi as a capricious barbarian who happily murders his way to power. Just in case anyone forgets he is a Muslim and a villain the makers have given him lots of meat to eat, lots of green flags with crescents, and his clothes are dark, he has a strange scars and his palace is filled with gloom. Meanwhile the Hindu Rajputs have are constantly bathed in radiant white lights, and have the good manners to be vegetarians, even the animal sacrifice made by Rattan Sen is hinted at rather than shown. Add to this the unending barrage of dialogues meant to bolster the image of Rajput valor and the good versus evil dichotomy even more obvious. 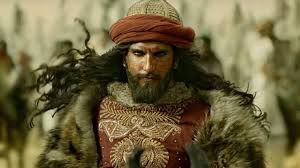 Despite this, Ranvir Singh is gives an outstanding performance, overshadowing even Deepika Padukaun’s titular Rani Padmavati. He overcomes the cheap caricature of a game of thrones character that has been written for him, and manages to give the cruel tyrant a level of humanity at times. Amongst all the murder and mayhem he instigates, there is sometimes an air of mischief and humour to his little asides and taunts. He is a brutal man, determined to possess everything “Nayab”, especially the priceless Padmavati, but when his first wife Mehru Nissa thwarts him his anger is restrained by his old love for her and he doesn’t kill her but sends her to prison. Khilji’s yearnings and restlessness are perfectly framed by Singh’s expressions and body language; from maniacally animated to sudden introspection bring much needed energy and life to what might have been a tale of stilted stereotypes. There is a moment as he prepares for battle and looks with such yearning towards the fort of Chittor that his helpless need almost elicits pity … but not quite.

Despite her small role Aditi Rao Hydari makes a strong impact as Mehru Nissa, Khilji’s literal better half, whose quiet bravery and helpless love for her evil husband can be seen in her beautiful eyes. Jim Sarbh as Malik Kafur, Khilji’s closest slave and hinted at lover was adequate, his glee at Mehru Nissa‘s fall and jealousy of Khiljis obsession with Padmavati just made him into another caricature aimed it demonizing Khilji further.

Padmavat has some wonderful songs and apart from the ridiculous dance by Khilji’s character the melodies are exquisitely picturized. Ghoomer in particular is amazing and well worth the entire ticket price, just to see the scale and depth of the photography. Setting those plusses aside perhaps the biggest missed opportunity  this film is the way it feeds into age old regressive values about honour and women. This film differs in significant details to the story immortalized by Malik Jayasi, (for instance in the original Rattan Singh was killed by another Maharaja who also wants Rani Padmavati), but it also completely obscures the deeper spiritual meanings behind the epic. Khilji’s empty conquest of a fort where Padmavati has died is a metaphor, showing that force cannot win people only their empty shells. The Sultan holds up the ashes of the dead Raja and his dead Ranis with regret and laments the insatiable desire of man for the illusory pleasures of this world.

Towards the end of the movie there is a scene where the collective women of the now defeated Rajputs of Chittor throw burning coals onto the invading Khilji, lighting a tiny spark of hope inside me that perhaps this long parade of lavish tableaux and awe inspiring panoramas would finally settle down to a point challenge the deeply regressive messages it was sending. Perhaps the women would not self-immolate, perhaps they would take the swords their men left behind or their everyday kitchen knives and attack the soldiers threatening them since rape and certain death seemed inevitable anyway, even a few dialogues questioning the act of Jauhar might have worked, instead director Sanjay Leela Bhansali reaffirms that even so many centuries later the honour and value of a woman lies in one place alone.

This review was printed in https://images.dawn.com/news/1179331/padmaavat-is-a-flawed-history-lesson-with-great-visuals