As a drama fan I am often left grinding my teeth in irritation as male characters are continuously forgiven, their mistakes brushed over while women are under constant moral scrutiny and pay the heaviest price for any deviation from the expected norm of bholi larki behaviour. While some of these tropes are an obvious ploy for ratings from an audience that loves mazloom aurtein, the deeper context is the acceptability of everyday misogyny in South Asian culture. The subcontinent is a dangerous place for women, while India has the horrifying distinction of being the no1 most dangerous place for women, Pakistan doesn’t lag far behind it at no 10.

So who are the men ( it is the men )who are making life so unsafe for women in a subcontinent that likes to say it “honors” women as mothers , sisters , wives and daughters ( when they are not aborted )? The reasonable mind assumes these must be the absolute dregs of society, the very scrapings of the very bottom of the human barrel; ignorant, vulgar and so animal like that they have no idea of common decency. However that soothing mirage vanishes as we discover the supposedly educated men of twitter who use the kind of violent rhetoric one would associate with a gang rapist.

Pakistani twitter was a buzz at the firing of a Chartered accountant from Bank Alfalah when journalist Hasan Zaidi reported the young man for using what can only be termed as vile, sexually explicit language aimed at Zaidi’s female relatives. Whether one agrees with, likes or dislikes either Hasan Zaidi or the politics of Fazeel Tajummal, no one in their right mind could possibly excuse the language and barely repressed violence in the latter’s tweets. Glancing down Tajummal’s feed we can see a pattern of deep seated misogyny, whenever he is angry his first mode of attack is someone’s sister or mother. Did I mention this young man is a chartered accountant, a unit head at well-known bank, not a day laborer sitting on the street or nikkama larki riding his father’s motorbike? Yet there is a desperate crowd of people fighting for this young man’s reinstatement, threatening to boycott the bank that fired him because

Apparently it is of the greatest concern to Pakistan that the man, who suggests other people’s sisters are prostitutes, and worse, has a bright future and a career. His rights to carry on abusing are so much more than his victim’s rights to live free of that abuse. This attitude is not limited to Pakistan; anchors at CNN have been heard all but weeping for high school footballers whose futures have been blighted by some young girl they raped. Predators roam free because: “what about their families”, and “she asked for it “while victims of sexual assault, groping and harassment hide in fear, their characters shred to pieces.

This behaviour is so common for women that we treat it like background noise, tuning it out and inadvertently feeding into its normalization; simply to stay a part of the conversation. Lurid jokes, innuendo, eve teasing are all ways in which men reduce and segregate women from the public discourse and power structures ,whether it is in real life or social media. Attacking a person by making sexually explicit comments about their mother or sister is considered par for the course because women’s bodies are the vessels that hold the fragile honour of our menfolk.

The more we accept this premise the easier going we are with such language. These words, that reduce all debate to judgment on the characters of an opponent’s women folk, are the facilitators of the rape culture surrounding us. We need to stop accepting this norm; we need to make it unacceptable.

America has seen high profile firings of Nazis and racists by corporations who have wisely made the decision not to have their brand associated with such negativity and discrimination , it’s about time Pakistan caught up with this trend . Just as no decent person wishes to be called racist or a Nazi, let these vile epithets against women be consigned to the dust bin of history and the dark fringes, unwelcome in the light of as “justice” and the honour killings that haunt our headlines , its not just a “batameezi”. It’s time to hold such men accountable they have had popular debate. Its high time Pakistan and indeed the subcontinent caught up with this trend. It’s time to stop using women’s bodies in primitive displays of male dominance. This behaviour is just an extension of the Jirgas that order females to be raped a free ride for long enough. 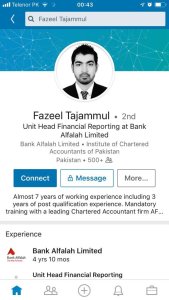 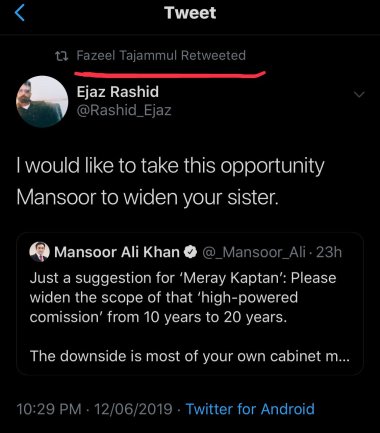 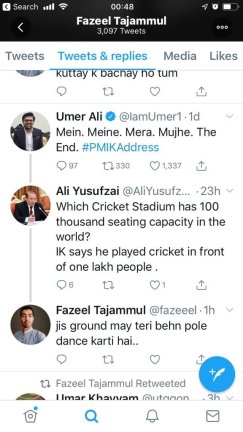 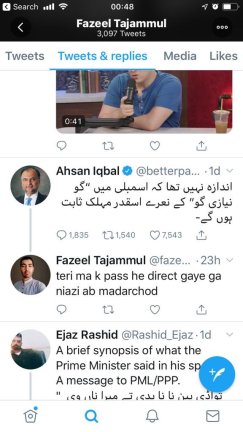