Pyar Kay Sadqay started off with the promise of something different but by episode 20 it looks as if this story  is  devolving into yet another Dusri Bivi or second wife drama.

Abdullah , played by Bilal Abbas, is a simple young man , whose stutter and inability to pass any exam except mathematics makes him look slow and even incompetent . The drama makers have not clarified Abdullah’s problems apart from saying he is “simple” or “ innocent” but the way he misses social cues , his lack of emotional intelligence and fear of his step father , the imposing Sarwar  ( Omair Rana)suggest he might be on the autism spectrum. Even without that diagnosis , it is clear that  much of his personal growth has been deliberately stunted. This manipulative stepfather ,is a dark shadow in Abdullah’s life and determined not to let all the wealth and possessions he now enjoys as a guardian slip away into what he conveniently classifies  as undeserving hands. Sarwar’s schemes are turned upside down when the girl he has fallen in love with ends up married to Abdullah.

Abdullah’s  equally ‘simple’  new wife , Mahjabeen, is just as inept at understanding the broader picture, but just as Abdullah has the polish of his elite surroundings, she has little more street smarts , and a better focus on the smaller issues that directly affect her . Yumna Zaidi  is one of our best young actresses , and as always goes all in with her portrayal of Mahjabeen . Pyar Kay Sadqay is written as a dead pan  almost (but not quite) black comedy and  gives Mahjabeen  a lot of one-liners . Zaidi often came across as irritating rather than sweet, but as the play has progressed it looks as if this too maybe part of the persona . Mahjabeen personality comes from the rich literary tradition of the  “wise fool” , like the famous Behlul of Baghdad or the court jester in King Lear ,she blurts  out uncomfortable , disturbing truths but  generally escapes the punishment or anger reserved for more sensible people .

Comedy , isn’t easy and  Yumna Zaidi misses the mark at times but she  excels  at capturing Mahjabeen’s quieter, emotional  moments. Her interactions with Abdullah and self-assumed superiority are much more endearing than any well aimed ‘zingers”. Bilal Abbas is an absolute joy to watch, he has played Abdullah with  restraint and underplayed the pathos, allowing him to be both vulnerable and kind,  but not so sweet that the audience cannot believe he  too might have a selfish side , evident from the way  he sneaks off to meet Shanzay .

Abdullah’s behavior isn’t all that surprising if we remember his character has been  has been surrounded by toxic behavior since birth .His stepfather has always demeaned him and even assaults him physically . He witnessed the violence and abuse meted out to his mother  Manzoora (Atiqa Odho) by his late birth father, and Abdullah has quietly accepted his mother’s blindness to the abuse Sarwar has inflicted on him. Writer Zanjabeel Asim Shah has artfully layered this story with a dark history of dysfunction and cruelty , that seeps out of every crack in the façade of this family’s life.

At the heart of everything that is wrong in this family  are Manzoora  and Sarwar . Manzoora is a fading beauty , who married her husband’s much younger assistant in a time of great upheaval ,when  her first  husband died . To complicate matters further , the ambitious Sarwar was once engaged to her sister in law and Manzoora takes a quiet pride in capturing the handsome younger man’s interest. As always Atiqa Odho is a delight , she is tolerant and kind but once Mahjabeen piques her vanity , she begins to withdraw. 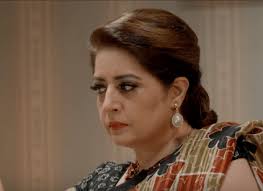 Pyar Kay Sadqay is full of fascinating  , layered  characters , but Sarwar is easily the most interesting . Brilliantly portrayed by Omair Rana , Sarwar is quite evil :he sexually harasses Mahjabeen , gaslights Abdullah and manipulates Mansoora with ease . Yet he is human , his longing for the oblivious Mahjabeen almost invokes pity before we see him yet again cross the limits of decency and tries to touch her , making us despise him again. Some  of the best scenes in this serial are between Sarwar and his cynical mother ( Gule Rana) , whom  he visits to vent on his own trials and tribulations . I am not sure whether to credit the writer , the director or the actors  for the delicious black humor in these vignettes because  Omair Rana has said  in an interview there were some improvisations and additions made to the script .

Gule Rana  and Omair Rana have great screen magic: the son sighs about his love for Mahjabeen , and spins his plans while the mother  slips him the kind of taunts Pakistani mothers reserve for underachieving school children .  She sends her  older servant out  in case Sarwar falls in love with her too

“Iss ko budhiya bohat pasand hai “ she declares , then asks him to get a secret second wife saying 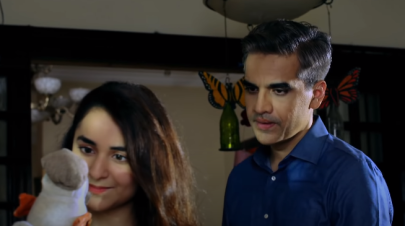 At the other end  of the tawdry love triangle we must have in every other drama is Shanzay, the girl who rejected Abdullah , and set him up to marry Mahjabeen.  Yashma Gill plays Shanzay so well : an entitled rich girl who only understands how much she hurt Abdullah when her husband Essa treats her in the same condescending manner and tries to erase her personality . Being a smart girl with a supportive father she immediately divorces the domineering Essa and pivots to the more malleable Abdullah as a crutch to her damaged ego. 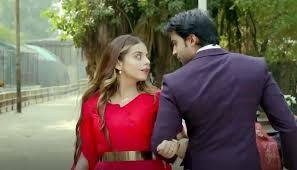 While this sounds convincing at a superficial level , it wears thin on deeper examination . Why would this “cool” ,  educated ,modern girl , with  wealth and options galore care about being labelled a divorcee ? Why would she pick an already married man , especially one that cannot string a sentence together without stammering and looking away ? Why would such girl slit her wrists over his refusal , as is evident from next week’s promo ?Even more strange is why Shanzay makes some of her most important decisions in her pajamas ?

At the risk of reading too much into it , let me hazard the guess  that this was to reinforce  to the sea of housewives watching (the only audience TV producers care about)  that Shahnzay is a “bad” girl.  It is hardly a secret that the ability to sell washing powder and dish soap to a particular audience decides the values we see on our screens . This is the tyranny of middleclass expectations and  why  we must face  a parade of  bholi larkiya barely surviving against chalaaq larkiya, unfaithful men , abusive men and  serial after serial with a second wife scenarios and the latest craze behnoi sey affair , on our screens.

This produces some interesting skirmishes in the class wars : Shanzay marrying a sophisticated wealthy young man  who  insists Shanzay  get up the day after their wedding to make him a cup of tea despite a house full of servants. Whereas good girl Mahjabeen keeps offering to make Abdullah tea despite the servants she too has at her disposal now. Then ,Shanzay , being a “bad” elite class girl with a lack of values ,manages to get a divorce in the space of a day , all in her night suit .  Good values Mahjabeen is willing to put up with anything , even sexual harassment , to maintain her relationship and makes Abdullah promise to never leave her . 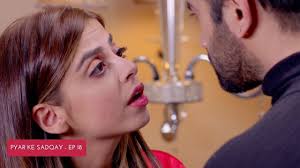 Shanzay gets a divorce ina day without changing her PJs

Having no values also means Shanzay is  not worried about Iddat of course , or any kind of  self-reflection  over the break up of her year long relationship and marriage , instead she puts on a frilly , off the shoulder blouse and wonders into Abdullah’s office completely unannounced . Nor does Shanzay ever register Mahjabeen’s status as Abdullah’s wife , for a modern girl she is surprisingly ready to be a second wife . Despite never passing an exam  Mahjabeen is much more intelligent , repeating all the dialogues about  values her middleclass mother has taught her about being an obedient wife but actually doing nothing but wander around Abdullah’s mansion. 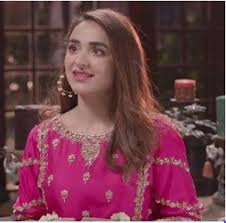 These contradictions  are  easily found in all our dramas because producers want to please the audience that makes them advertising revenue . So, despite high hopes for this serial touching on other subjects such as mentally challenged adults succeeding in life despite their difficulties , an exploration of the importance of positive father figures or simply some romance we see it dissolve into a competition for Abdullah.

Director Farooq Rind has done a great job of keeping the audience interested , and the story has not slowed down a bit . Though there is nothing particularly unique about the story , Rind has kept his cast under the glare of bright lights  and given  the drama a theatrical , almost pantomime style feeling, but I am not exactly sure how this adds to the story . The only scenes such stylization  does work are  in are the ones with Omair Rana is playing his villainous best. The lighting , signature tune and Rana’s use of camera angles brings some small hint of originality to a story fast losing its freshness.